Saburo Matsumoto had a dream... to produce one of the world's most popular cameras for the common people. 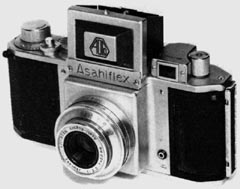 This man had a dream… to produce one of the world’s most popular cameras for the common people. That man was Mr. Saburo Matsumoto.

It was 1932 and his company was already manufacturing high quality optics and lenses for other Japanese manufacturers including Molta (later known as Minolta) and also Konishi for their famous little vest pocket camera, the Pearlette (they became Konica). Still, Mr. Matsumoto wanted to produce not only the fine optical lenses, but the camera as well.

Matsumoto had highly admired the German cameras’ quality and their excellent craftsmanship. Already he had noticed Canon had already taken that step in using the Leica and their Leitz Elmar lenses high-grade quality as the example by producing a similar rangefinder of high quality, but of 100% Japanese manufacture. Nippon Kogaku (Nikon) used the beautiful Zeiss Contax as their basis for their own rangefinder, but at a much later date. But still, Mr. Matsumoto wanted to go one step further; not only to produce the complete camera, but a reflexreflex
Cameras equipped with a targeting system that allows you to see through the viewfinder the framing that lens collects and reproduces the image on the sensing element (film or sensor). camera at that! He wanted to do it the Japanese way; smaller, more compact and yet still keeping the high quality that everyone associated with German cameras.

It was now the late 1930’s and Matsumoto was becoming more and more despondent, especially when most of his production was for the military, making optics for weapons. This was due to the fact that the government had been taken over by the military power. But during these times Matsumoto managed to buy a small factory plant just northwest of Tokyo where he was manufacturing lenses for commercial cameras. It was at this time in 1938 that he changed the firm’s name to Asahi Optical Company. Soon after, WWII broke out and so his dream had to be shelved for the time being.

When the conflict was over, Mr.Matsumoto then had to make and supply lenses for the occupying powers. Until 1948, he managed to successfully make and sell the beautiful compact binoculars named Jupiter of which were highly thought of in both style, compactness and in the excellent quality optics, which were coated. Due to this success, Asahi Opt. Co. was now producing 100% consumer optics. This put Mr. Matsumoto in a position to dust-off his dream and, with the help of his two chief design engineers, got to work burning the midnight oil. They managed to produce the first prototype during the period of November 1949, finishing it in early 1950. In typical Japanese fashion they had made a fully working prototype by the end of 1951! Quite a feat in itself, and there was born the beginning of a famous era. With many worlds’ firsts and innovations to proudly display in the A.O.C. boardroom, it ushered in a new age of quality, affordable cameras.

Mr. Saburo Matsumoto’s dream reflex camera was inspired by his own personal camera, which he purchased in 1935 and greatly admired. It was the Dresden manufactured Reflex-Korelle with the equally world-renowned lens, the Zeiss Tessar. This 2 ¼" square medium format camera used roll film with a reflex returnable mirror system using a focal plane shutter mechanism. The standard lens at that time was the Tessar 8cm (80mm) at f/2.8 (!) and shutter speeds were operated using two dials (this system A.O.C. successfully incorporated up to the Pentax K model). The main dial had speeds from 1/25 sec to 1/500 sec but for timed exposures you had to set the dial to B. The slow speed dial was 1/10 sec to down 2 seconds. 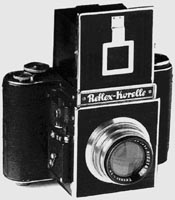 The wind-on knob had a neat little fold down lever, which was next to the film counter window on the left of the top plate. When using the waist level finder the camera fits comfortably into the palm of your right hand and you could then easily operate the shutter lever with your thumb. For using the telephoto lenses and for fast action there is a ‘sports finder’ frame that you just lift into position. This model was produced from 1935 and was upgraded on only a few models with the added extras as slower speeds and a self-timer.

So from this 2 ¼" square heavyweight from Dresden, Germany (weighing 1,700 grams at 142mm x 98mm x 95mm) came forth the amazing little, light, and loveable Asahiflex from Tokyo, Japan. 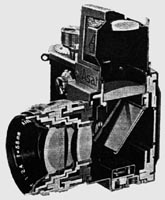 The original article was published on SPOTMATIC magazine #23, January 2000.