The Asahi Pentax K, introduced in May 1958, was the final development of the first generation pentaprism SLRs from Asahi Opt. Co. Ltd. 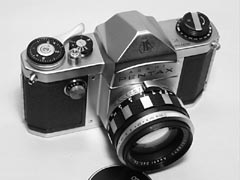 First you notice the K has a new lens, named the Auto-Takumar 55mm f/1.8, bearing a chrome finished diaphragm cocking lever. Remove the lens and you can see both a protruding pin on the lower part of the lens itself and a moving plate inside the base of the body mount. That was a diaphragm release plate, first introduced by Praktica FX2 of 1955. After the screw mount itself, this was another tribute from Pentax to the famous Dresden based company which, at the time, was one of the leading SLRSLR
Acronym of "Single Lens Reflex". See also "Reflex" manufacturers.

This diaphragm release plate is coupled to the shutter release, while the lens iris is opened to full aperture by the spring loaded lever and closed to the set value by pushing the pin. Operation of such a device is quite simple: prior to shooting, you have to pre-set a proper aperture by the usual diaphragm ring on the lens and cock the diaphragm lever in order to frame and focus the subject at maximum aperture. As soon as the shutter release button is depressed, the diaphragm plate hinges forward to operate the diaphragm pin and the iris is stopped down to the selected aperture, then the shutter is released instantly. The diaphragm release plate stays forward as long as the release button is depressed, but this is not a drawback in itself, since the 'Auto' lens is actually semi-automatic, and only reopens when you cock the lever again.

Another improvement upon previous models was the first 1/1000th top speed in an AOC camera, hence its "K" designation, which means 1000 in international units. Framing and focusing also gained a brighter Fresnel screen. A minor difference was the rewind crank which changed from chrome to black.

Said about these improvements, the Asahi Pentax K can be considered a good refinement of the original Asahi Pentax models. However the model S was not discontinued immediately after the introduction of the K and the two cameras stayed in production side by side until May, 1959. Today, the K is far more common than the S in the collectors' market, thus indicating a better commercial success. According to Fred Sherfy's book "Asahiflex and the pre-1959 Asahi Pentax Cameras", the K was purchased by both Life and National Geographic magazines for their photographers.

The Asahi Pentax K was available in either satin chrome or all black finish, the latter being far less common. The black version of the K was equipped with a matching black standard lens, with the diaphragm cocking lever as the only chrome feature, while the chrome version also had chrome finished aperture and depth-of-field rings and black and chrome focusing ring, which was in fashion in German cameras of the era. The model K was the last Asahi Pentax camera sold by Sears, Roebuck and Co., marketed under their brand name Tower 29. It can be of some interest to highlight that in South Africa it was called the Asahi Pentar K, after the Pentax name was registered by the East-German company Pentacon, manufacturer of the Praktica line. 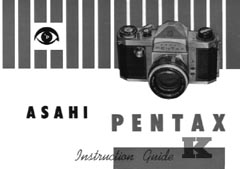 The Asahi Pentax K had the model designation marked below the 6-digit serial number on the top plate, left of the pentaprism, the position of serial numbers in all screw mount Pentaxes. Serial numbers registered by the author range from 154677 of the operating manual to 179288 (approximately 154000 to 182000, according to Mr.Sherfy), but it has to be mentioned that some S can also be found within this range. It has been estimated that between 20,000 and 25,000 units were produced.

The only standard lens for the Asahi Pentax K was the above mentioned 58mm f/1.8 Auto-Takumar. Soon after the 55mm f/1.8, the new wide-angle Auto-Takumar 35mm f/2.3 and the medium-telephoto Auto-Takumar 105mm f/2.8 were introduced, again featuring the semi-automatic diaphragm operation. A picture of the unusual Auto-Takumar 35mm f/2.3, has been published in Spotmatic no.10, page 27. The Asahi line of Takumar lenses for the K also included the 35mm f/4, one of the early wide-angles with retrofocus design, the 83mm f/1.9, the 100mm f/3.5, the 135mm f/3.5, the 300mm f/4, the 500mm f/5 and the 1000mm f/8, all of them featuring manual diaphragm. In 1958, the Asahi Pentax system included a total of 10 interchangeable lenses from 35mm to 1000mm and was an already well established system. Yes, it was a bit short about wide-angle lenses by today's standard, but you have to mind that other SLR systems of the era still offered no retrofocus wide-angles and most camera manufacturers still had no SLR system at all, while the most famous of today were at their very beginning. It is worth noting that Pentax, unlike other manufacturers, never sold wide-angle lenses of symmetrical design, which required the mirror to be locked up before fitting and loosing reflexreflex
Cameras equipped with a targeting system that allows you to see through the viewfinder the framing that lens collects and reproduces the image on the sensing element (film or sensor). viewing. On the contrary, Asahi designed retrofocus wide-angle lenses from the beginning, thus allowing SLR viewing to be always available.

SPECIFICATIONS OF THE ASAHI PENTAX K:

The original article was published on SPOTMATIC magazine #16, April 1998.