Life and death of a famous professional photographer. 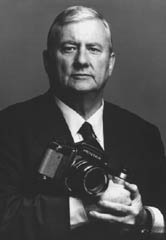 The Asahi Pentax 6x7, then Pentax 67, has been a very successfull medium format camera and is still going strong in the fashion and glamour pro market, mostly in UK and USA. Thinking of professionals working with the 67 brings to mind such names as Sam Haskins, Bob Carlos-Clarke, David Bailey, John Swannell, Terence Donovan... well, the late Terence Donovan, as he left us last November 22nd, 1996.

Born September 14, 1936, son of an East End lorry driver, the young Terence left school at 11 with the intention of becoming a chef. He said, "I really wanted to be a chef, but they wouldn't have taken me until I was 15, so I said I wanted to be a lithographer, my uncle Joe was one and he was the top bloke in the family ... good money, you know." So he studied blockmaking at Fleet Street's London School of Engraving and Lithography, then he worked in the photo department of a Fleet Street blockmaker where he discovered photography.

Donovan's father died of lung cancer before his only son's career took off. Consequently, Terence always refused to get involved with tobacco advertising or allow smoke into his studio. Unlike many who found fame in the 60's, Donovan did not indulge in wild behaviour, being teetotaler from the age of 25 and a fervent non-smoker.

Donovan's career developed the classical "master-pupil" way: in the beginning he assisted Michael Williams, John Adrian and the legendary John French in 1957, who spawned many other fashion photographers, David Bailey included. Then, after working as a military photographer, in 1959 he had set up his own studio. At 25 he decided that he didn't want the hassle of deciding what to wear each morning, so he bulk-ordered identical gray flannel suits, white shirts, black shoes - and never digressed. Not that common for a fashion photographer, but nothing in Donovan was common.

Working for Town fashion magazine Donovan moved the classical locations for male fashion from Regent's Park or country houses to the gasworks, juxtaposing the soft and the hard, the luxurious and the everyday. His pictures were very innovative for the time - he was shooting grainy pictures long before they became de rigueur. In 1961 his gangster series anticipated the Bond movies. Donovan said, "It was working for Town that really got me started and got me a name." He also worked regularly for Queen, Vogue, Elle and Marie Claire. In June 1971 Nova magazine ran "Is There Any Truth in the Rumour?", three pages of harsh black-and-white fashion photographs about jackets, photographing models standing in the courtyard of a block of council flats, waiting in front of the post office, sitting on a bleak concrete flight of steps.

In the 1960s Bailey and Donovan revolutionized fashion photography in UK and reinvented the photographer-model relationship. In his 1973 history of photography "The Magic Image", Cecil Beaton dubbed David Bailey, Terence Donovan and Brian Duffy "The Terrible Three". With Bailey and Duffy, Donovan created the visual component of the London myth of the 60s: having fun, having sex, having money (just enough), having ambition. They weren't interested in how elegant a model might make the clothes look, they wanted to show how sexy the clothes could make the model look - a revolution in thinking as well as in looking. Their work projected the raw, classless glamour epitomized by Julie Christie, Celia Hammond and Jean Shrimpton. After Antonioni's movie "Blow Up" (1966) every fashion shoot would be seen as a prelude to sex and every fashion photographer as cool, coercive, totally heterosexual and utterly charismatic.

Donovan also photographed celebrities, from Jimi Hendrix to Princess Diana, and the Duke and the Duchess of York (for their formal portraits). According to his mate, David Bailey, "He was the first person to make Margaret Thatcher look soft and approachable." Bailey called him the "Orson Welles of photography", however he always find time to meet amateurs on many a winter's night at camera clubs. Speaking to students at Manchester Polytechnic in 1974, he advised: "You don't have to work for an employer, you have to find something you want to do, and get someone to pay you to do it."

One of the few photographers to develop all his own pictures, Donovan retained his sense of darkroom awe at the magic of seeing images he had created appear on blank paper. Lately Donovan had been critical of young photographers: "I know my job from the bottom up. These guys don't even know how to load a camera" And then: "Someone asked me where I got the idea from and I said, I did something rather odd... I thought of it! It seems to be a rather old-fashioned thing to do."

In 1973, he produced and directed a feature film, a spy thriller called "Yellow Dog", but it was not a commercial success. Terence Donovan's first book was the little known "Women Throo the Eyes of A Smudger (TD)", while in 1983 he published "Glances", a collection of photographs and fragments of semi-fictional narrative. At the time, it was assessed as chauvinist and at odds with current thinking about women and sexuality. Looking through this book now, it re-emerges as a remarkable and knowing comedy about sexual mores and about our endless capacity to fantasize the real. Opposite one photograph of a model wearing an unusually revealing army uniform, he writes: "My Aunt Betty used to dress like this; her lips were just as dark"

A judo black belt, the "gentle giant" went to Rome in 1995 where he had been shooting some pictures commissioned by an Italian magazine. There he was mugged by four young men, two with knives. At the end he left them all lying on the pavement in pain. As he left the scene, a queue of people at a bus stop had burst into applause. Terence also adopted Buddhism, but did not adhere to all its principles. "I would happily break a bloke's neck," he remarked, "but I wouldn't swat a fly."

A Donovan shoot was always a relaxed happy occasion, enlivened by his witty commentaries and jokes. He wanted the people around him to enjoy what they were doing as much as he enjoyed his part in it. When Princess Di was looking a bit glum for a minute, he put a £10 note over the lens and said "Recognize a relative?" Donovan had time for everyone and someone who worked closely with him for years commented: "He was like a rock for us all, so strong for everyone."

In 1996 Pentax UK chose Donovan as a testimonial for their latest campaign, advertising both the MZ-5 and the venerable 67 and pushing the message: "If it's good enough for Donovan, it must be good." After Donovan took his life, a picture of him with the caption "1936-1996" was published as a last salute to the man. See that picture published here on previous page.

Donovan was married twice. He is survived by his second wife Diana, a son from his first marriage and a son and daughter from his second marriage. His eldest son is the rock musician Dan Donovan - formerly of Big Audio Dynamite and the first husband of Patsy Kensit.

Despite more than 3,000 TV commercials and rock videos, and the awards, Donovan lately returned to his first passion, photography. His most recent assignment was to photograph 20 of Britain's leading men for the magazine GQ. One of them was a self-portrait. It is likely his work on videos and commercials had taken him away from the magazine work, which had changed, so his new pictures were visibly dated and old-fashioned, although technically excellent. This difficult re-entry in his beloved world of still photography could also have added more depression to him, giving further explanation to his desperate act. Others disagree with this explanation, telling he was moving forward with great strides, still being completely ambitious and competitive. Quiet, reflective and ultimately deeply private, the mystery of Donovan that will remain for all his friends across the world is why that strength ran out with such a dramatic lack of warning.

After Terence Donovan's suicide Eamonn McCabe, picture editor of "The Guardian" wrote: "So the big man has gone, and in a time when photography takes itself too seriously, so has the fun."

The original article was published on SPOTMATIC magazine #13, July 1997.