Among the many activities of the day (please read reports about previous editions), this year we'll celebrate 50 years of the original Asahi Pentax (AP) SLRSLR
Acronym of "Single Lens Reflex". See also "Reflex" camera, which was introduced by Pentax (formerly Asahi Opt. Co.) in May 1957. Superseding the Asahiflex waist-level finder SLR cameras, the Asahi Pentax gained its name by sporting a built-in fixed pentaprism viewfinder for the first time ever. That feature, combined with the camera clean and stylish design, instant-return mirror (another world's first by Pentax), rational control layout and a standard lens mount (M42x1) put together a successful camera which set industry standards, to be copied by all competitors. Now the AP can be considered the forerunner of modern SLR's of all makers. Also current DSLR's owe a lot to it.

The main photo exhibition by AOHC members is themed about “Urban Landscape". The winning pictures, selected by a jury at the Pentax Day, will show-up in the AOHC calendar 2008.
Another group exhibition of pictures by AOHC members will be on display.
A third exhibition is called PENTAX Street and will include B&W street photography photos supplied by members of the Italian Pentax Forum and selected by PDML (Pentax Discuss Mailing List) international members.

Visitors attending the event will also find pretty models and sport cars to shoot at, as well as thoroughbreed horses of the world-renowned Orsi Mangelli stable, and much more. 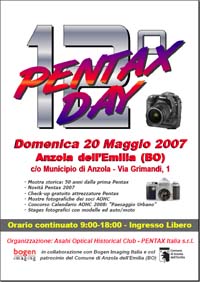 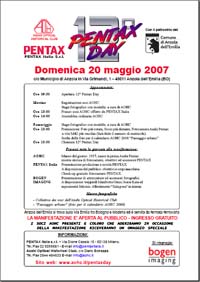 For reaching the 12th Pentax Day:

Thanks to: Bogen Imaging